Comment | radtupperware commented on Are the RIO SNGs/MTTs going to be FR or 6max?

I think most fun players usually prefer FR to 6 max. Of course, this is all us just speculating based on people we've talked to, etc. But I think it's a mix of how often you have to play the blinds and the shorter the table the more you feel like you're being exploited by certain players.

Tried to tune in today (first day not at work). The lack of hole cards really does influence the entertainment aspect of it. Couldn't watch just for fun, maybe I'll tune in later again if I want to try to watch seriously and think about ranges, etc. but the format isn't particularly conducive to tuning in for entertainment.

Sometimes I'll use erratic preflop sizings so people who watch your videos get scared.

Here are my notes.

Kalupso how did you do such a calculation? Just curious to try on some of my own results lol.

I've certainly had an inauspicious start to "keeping up with the blog." That said, I finally will make another post here.

What have I been doing? A little bit of everything. Keeping up my full-time job, spending time with my family (and cats!), playing some poker, and studying some poker. In terms of playing, I've actually been playing a bit online (which is very strange for me). I haven't been able to put in too much volume because of all those other things I described, but for those of you who like graphs, I can provide one. 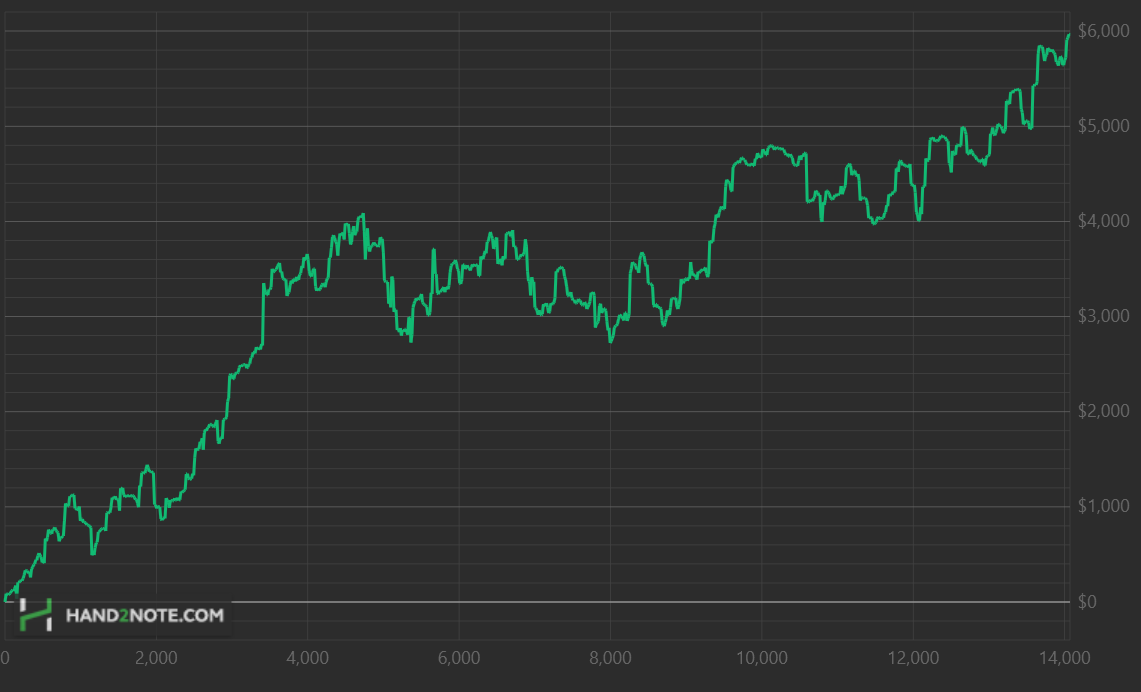 All the volume there is 200NL at ignition (mostly zone, some regular tables) since a little before Christmas.

Of course, that graph presents me in a pretty positive light. I can tell you that I have been losing some money at other non-NL games in the past few weeks (bleh).

That said, I think "losing" at other games has actually been helping me a lot. I haven't put a lot of time into memorizing pio sims and become a gto-bot, which I think has been for the better. Instead, I've been thinking, and I mean actually thinking! It's something it's very easy to get away with not doing when you're watching videos on rio (sorry rio!) or covering your ears and blindly memorizing pio sims.

There is a (somewhat) famous quote from Bruce Lee that goes something like this:

Variation is good for our brains and we learn to understand a lot more when we study and practice similar things to what we want to master. So, I've been taking that approach.

I've been doing two things in my poker studies recently

Well, to anyone out there who actually read this, thanks for sticking out through a serious lull in posts to get started. I'll try to post more frequently going forward (my girlfriend bought me a mechanical keyboard and it's a hoot to type on it!). My next post will probably be less wordy. Maybe it'll have an actual hand in it or something. Only time will tell.

Thought the format was good. I like the replayer vids. If anything I would like to see more non-heads up hands though. But same format with more players would be nice. I also really liked your scoop replay type stuff from back in the day.

Short notes for anyone that wants them.

Haven't watched the video yet although I do plan to. Just wanted to say I recently finished your book and thought it was excellent! Strongly recommend it to everyone out there -- should be a must have for a poker player's library.

Comment | radtupperware commented on Most Underrated Card in Poker

Good video, thanks Richard. I'm happy to have a break from the very long scoop series.

Here are my notes for anyone that wants them.

Great video Phil. I'd be happy to see more of this footage. In this video you definitely did a good job expressing your thoughts very intuitively, which I appreciated.

Here are my notes for anybody that wants them.

Looks like R or python (I use python to make very similar ones). They're called stacked bar graphs (if I'm remembering the video correctly). You can generate csv files from you PIO sims then read those in with R or python.

As far as I'm aware you'll have to write some functions to determine hand class (at least I did -- I know PIO must have the functions written already internally but the csv files don't seem to include anything like that).

Here are my notes to go along with the video.

@beautiful_fold lmao the link had underscores in it which the site formatted as italics. :)

In spots like this I think it’s basically meaningless to real life play and some arcane relic of how PIO bluffs. Maybe one combo will be much more valuable than the other but it really depends what your opponent will do. If he always/never bluffs certain combos etc.

My quick notes in case they help anyone.

Haven't watched the video and I'm not commenting about it. Welcome to RIO. Try to get them to make your picture look better on that background. :)

If BR isn’t a problem and you feel like you can beat the tougher games, go for it. Can’t hurt too much to try.

While watching I was surprised the QK raise didn’t have any mention of your Qx. He now basically beats any Qx that you decided to x/r and you are much more heavily weighted toward those and flush draws. So he can get value from Qx and deny equity to flush draws.

Seems like you were much more concerned with 5x but I would have guessed given the 5 your range is pretty Qx heavy for value. But maybe you don’t x/r those often or perhaps you check Qx super often on this turn? (If so it’s easy to be very heavily weighted toward bluffs because we won’t have many 5x so again I see merit in the raise exploitatively).

I wanted to download a video or two for my flight this afternoon but it appears the download button is gone from mobile? (Or perhaps I'm just not seeing it I guess...)

Any way to remedy this?

Comment | radtupperware commented on $500 NL Ignition: Grinding Against the Unknowns

Interesting. I actually didn't know that. Thanks for pointing this out!

Interesting. I'm going to leave a comment as a pure observer since I don't know anything about the pokerstars scene (since I am in the US) and I can't really have any idea who plays in the 500z games regularly (nor who is winning at them).

I definitely agree that transparency is pretty important, and I would like to see the results at zoom if we're going to be parading our results as a means for listening to our coaching.

I'm regarded as "essential" when I play 500z games everyday and yet
we have "Elite" coaches that only play those games to make videos.

I'm not really sure "playing those games everyday" is really what matters in determining "elite" or "essential" content in my mind. In my mind, "essential" content is the stuff that's aimed at a slightly more beginner type audience. Take Carroters for example -- I have no idea what stake he plays, but it's clear his content is aimed more at people just trying to take their game seriously and his content should definitely be "essential" because it's most beneficial to those viewers. While, on the opposite end of the spectrum I feel someone like KRab or Uri Peleg seem to be targeting people who have already thought pretty deeply about the game before and hence their stuff is more useful to "elite" members.

Of course, this is not necessarily a defense of how RIO chooses who are elite and essential video makers. To be frank, I definitely don't think they're always right and there are some "essential" video makes that I watch all videos from and plenty of "elite" video makes that I just completely disregard when their videos come out.

\I also want to point out that I think people tend to conflate "quality" of the video maker with whether it should be "elite" or "essential." I don't really agree with that (again, I think Carroters makes fantastic videos as an example). It should be more of "who is your material useful for."

Finally, just to make sure I'm nice and diplomatic, both psek1 and saulo have been making pretty decent videos to watch recently. I won't comment here publicly and further than that.

Looking forward to part 2. Your videos are probably the best NLHE replay videos on RIO. Keep it up.

super late comment since I'm just watching this one, but you mentioned a predraw video.

I think it would be nice to see a video on predraw hands in some different games. Generally badugi doesn't screw me up, but some predraw in badacey and badeucy would be pretty useful to me. Perhaps you can also include single draw games where the predraw is half the game.

If you're not interesting in just a pure predraw video something with badeucy and badacey theory would be helpful to me. I struggle with these two way lowball games.

I only play for peanuts on the site (so take what I say with a grain of salt), but I haven't noticed any issues. I do run a little bad on the site overall so far, but not out of the realm of possibility.

Seems like a well played hand from young gun overall. Seems like a pretty strong player. I probably would prefer to float K high than A high on the flop because the ev of spiking a king should be better than an ace, and we don’t have to defend that much to put villain indifferent when 3 way. But of course if villain is playing too weak tight on turns and rivers I think floating this hand looks pretty good too.

Elías Gutierrez Glad to hear you're buying a home in Japan. I liked it a lot when I visited as well. You'll be missed on RIO -- your videos were certainly of the more entertaining variety than most. If you're ever in San Diego, hit me up and I'll buy you a beer.

Comment | radtupperware commented on $500 Zoom Hands in the Lab

Just going to add on since apparently RIO thinks I want to get notified about this conversation.

I do think that I would prefer to employ a big bet in this spot. I think someone mentioned above, but the J does make our range a lot more polarized than most club turns.

That said, I also think Gary did a good describing his thought process, which can help you in other spots. Most of the time, the thought process of why things are going on is a lot more important than the exact implementation.

Where do you guys play short deck? Don't think I've ever seen it running at any local cardrooms to me (Southern California).

Schorle I got same results as OP using their assumptions (with our KQJT blocked). If you make them both tighter it will become more likely they have AA of course.

Seems like a real gray area if you're opening it up on Monker. I personally wouldn't do it, but it's probably not expressly against the rules.