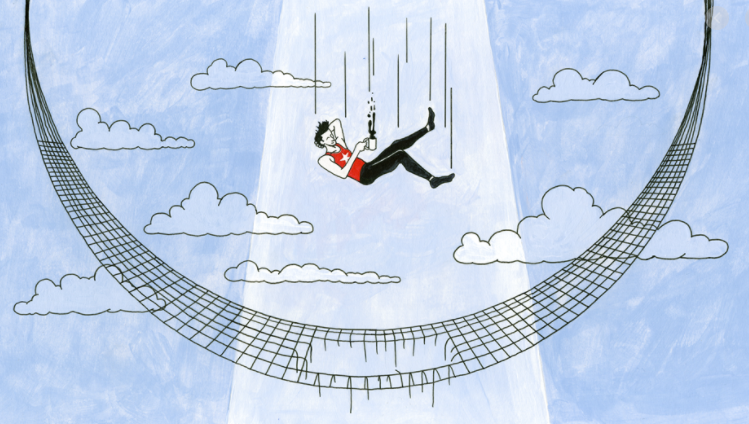 You can find more of my story here in my journal but I'll try to summarize it in this post, as best as I can.

My family struggled with money since I was a kid, my father was blue-collar while my mother, decided to stay at home because she hadn't any willingness to work. With a single paycheck, financial problems were always present and I've sensed it at a very young age. I recall a recurring nightmare where I was in front of a huge pile of money and I had to move it, from one place to another, with haste. When I wake up I was sweaty as hell.

Poverty molded my personality and this issue touches me deeply. Homeless people are the ones with whom I feel more connection, it seems like I can feel their suffering. For that reason, I've always made charity to them, even when I was a broke kid. Many many times I've decided to don't buy my snacks and instead give the money to them.

My life was miserable, my parents didn't provide enough food and didn't care too much. I had to cope with many issues while I was a kid with no experience in the world, it was devastating at best.
Eventually, stress got the best of me, and I had hyperthyroidism as a reaction, a disease that I was on meds for 14 years, but thankfully, I get rid of.
Since my family was a mess, a welfare worker (I don't know whether it is the correct term), was assigned to me, and gladly, he changed my life.
I have begun to eat enough and properly, I also get new dresses instead of the old, patchy ones, and I've also got other perks as well.

Fast forwarding, at some point, I've begun to play poker and got lucky enough to win at the very beginning. I've started with ZERO, from freerolls, and made up a good amount of money, from with I've started to live on my own.
I was very proud of myself, I was confident and my future was bright, but something was always looming over. I cannot address it because it wasn't clear and it isn't even right now, but I think is something related to my parents.

6 years ago I got sick, with an unknown disease, I felt drowning along with other several issues. I've started to play less and less and spent most of the money won on exams and cures.

I've met the best doctors and I still have no diagnosis, but one of them pointed out that it could be something related to my mind. A wake-up call that something wasn't right.
At the time, I didn't pay attention to the comment, but now I do. After I've done any exam that doesn't highlight anything abnormal I have to surrender and be open to the fact that my suffering could easily be psychological.
If I have to be fair, my disease started when I was experiencing many stressful events at once, alone. I think the recognition of being alone in life and have to count only on myself was the culprit. It was too heavy to bear. I've always felt that way, but suddenly, it becomes apparent.

In reality, I'm not lonely at all, because I've friends that long to be with me, but deep down something is missing, and I think it is the lack of a safety net.
I was able to sustain myself for over 10 years with poker, I was never a financial burden for my parents. Right now they got 3k into their bank account, they accomplished to burned 400k on nothing and I had to save their ass once.
The problem is... they won't do the same thing for me, both because they don't want to and because they can't do it because they lack money.
The bottom line is that I've always felt I have no parachute, if I fail in poker or if I need any kind of help, I won't be able to ask.
I know, because I've tried.
I want to highlight that I haven't asked for money, or any help whatsoever. They aren't able to look after themselves and I cannot count on them.

Right now I've got little money on the side and I'm staked for years now. The problem is my staker is going to close the stable down soon, so I have to play with my own money or look around for another stake, which I fear I won't find.
It's kinda funny because I've played 4M hands with 5BB/100 profit and I still think nobody will be interested in me. This insecurity (for no reason) stems from my broken childhood.

I want to join BrPC or Poker Detox but I'm still behind schedule for that, I wanted to have a full year of expenses covered but now I've got 8 months. I think getting accepted into one of those programs will save my life, really.
I will be part of a team, working together for a common goal, it will be a complete life changer. I want to show myself want I'm really capable of.
I've opened up a journal 2 months ago, to open up myself, venting the problems which I've always hide from other people. Right now I'm running really bad for the last 100k hands and my confidence nosedived.

I feel like I'm playing a video game with a single life, at hardest mode.
I cannot thrive, I cannot explore things in life, I'm blocked.
I've read a ton of self-help books, obv, they didn't help.
I had psychotherapy with a very skilled guy, but I've stopped it because I hadn't enough money.
I don't enjoy life, I try to save on everything and this leads me to a life of deprivation. I don't buy new clothes for a year now, I don't go on vacation for 5 years now and I don't pause my mind since my birth.

I also think I lack vision, I don't have a clear goal anymore which makes every day exactly the same as the previous one, a grind, a suffering.
Even if I feel that way, I can assure you, I wake up every day, with a knife between my teeth, ready to fight again and again for a better future.
I'm astonished by that because after many years of this, most would just give up.

I'm also feeling a deep resentment for people that I know, they got everything in life with no effort, they were lucky enough to have been in the right family. I've always wondered what would I be able to achieve with the right conditions. This envy isn't healthy, I know that.
Meritocracy is my religion, I think people who fight more deserve better, the problem is life doesn't work that way. I know it, but deep down, admitting that will just void my efforts.
I admire people who climb up the ladder from the very bottom.

I'm open to any advice, so if you have one, I'm more than glad to hear that.

If not, np, ty for your time, it was a wall of text and I've appreciated you made it to the end